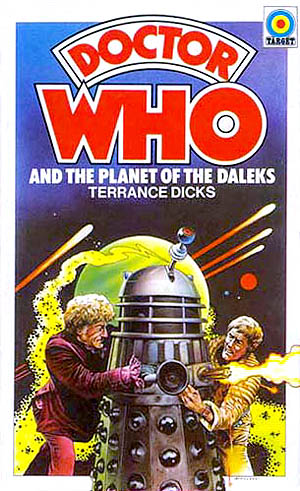 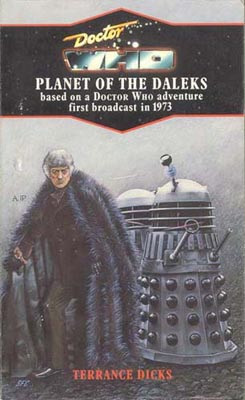 Jo peered through the panel and saw nothing. Yet someone had entered the cabin. She could hear hoarse breathing and stealthy padding footsteps. A beaker rose in the air of its own accord, then dropped to the floor … THE INVISIBLE ENEMY

After pursuing the DALEKS through Space, DOCTOR WHO lands on the Planet of Spiridon, in the midst of a tropical jungle … and finds more than Daleks. Vicious plants spitting deadly poison, invisible Spiridons attacking from all sides and, in hiding, a vast army, waits … for the moment to mobilise and CONQUER

‘THE DOCTOR’S BREATHING SEEMS TO HAVE STOPPED. THERE IS NO PULSE OR HEARTBEAT, AND HIS SKIN IS ICY COLD.’

Alone with the injured and unconscious Doctor, Jo Grant ventures on to the planet Spiridon to find help.

But in the lush undergrowth of Spiridon there lurks disease, poisonous plants, invisible enemy and, most sinister of all, an army of Daleks, waiting in secret for the signal to mobilize – and conquer.

This novelisation by Terrance Dicks of an original script by Terry Nation, creator of the Daleks as well as of such classic series as Blake’s 7 and Survivors.

DEVIATIONS FROM THE TELEVISED STORY

Any cookies that may not be particularly necessary for the website to function and is used specifically to collect user personal data via analytics, ads, other embedded contents are termed as non-necessary cookies. It is mandatory to procure user consent prior to running these cookies on your website.