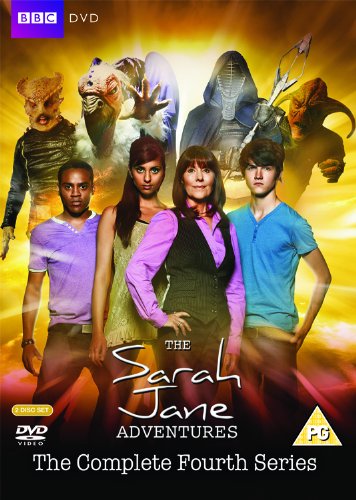 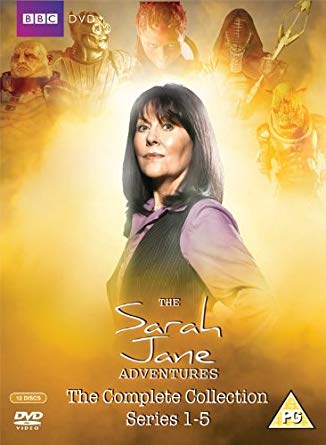 The Vault of Secrets is a two-part story of the Sarah Jane Adventures. It is the second story of the fourth series

A teenage girl enters an asylum, and approaches The Vault of Secrets. She tries to access it, but only has one disc. She is then confronted by The Alliance of Shades, so she escapes, injures herself and falls over. Androvax exits her body, and escapes. The Alliance of Shades (a.k.a. Men In Black) arrive at the scene, and scan the unconscious girl. The Veil is declared no longer in her.

Sarah Jane, Clyde and Rani are in the attic, speaking to Luke on webcam, and Mr Smith interferes with a NASA space probe on Mars, to prevent it discovering an ancient and deadly civilisation.

Gita and her husband Haresh have joined B.U.R.P.S.S. (The British UFO Research and Paranormal Studies Society) due to Gita’s encounter with the Judoon and Androvax in the past. When the couple arrive home on Bannerman Road, Gita spots Androvax entering Sarah Jane’s front garden.

Haresh arms himself and goes to investigate, and encounters Sarah Jane, Rani and Clyde. Haresh leaves after a conversation with them, and Androvax enters Rani’s body. Sarah Jane scans for alien activity, and realises Rani has been taken over. Sarah Jane and Clyde chase her/him to the attic, and order Mr Smith to contain him after exiting Rani’s body.

They discover that Androvax is dying, having escaped a prison in a swamp and been poisoned by an alien viper. He intends to free 100 of his people from cryogenic sleep in The Vault of Secrets – the last survivors of the Veil species, aside from Androvax himself.

Ocean Waters, the founder of B.U.R.P.S.S., arrives with Minty to scan for alien activity by picking up Beta particles. Sarah Jane uses her Sonic lipstick to deactivate this device.

The gang arrive home, where they agree with Androvax to let him use Clyde’s body. They then speak to Ocean and Minty. Ocean turns out to have the other disc required to enter the Vault, and she recalls past encounters with the Men In Black and Mister Dread. Then the Men In Black arrive and tell them they must prepare to be incinerated.

The incineration is averted, Androvax escapes and enters Gita’s body. Gita leaves for the Vault, and is followed by Mister Dread, Sarah Jane, Rani and Clyde. Sarah Jane causes Mister Dread’s car to malfunction, so he acquires a new one.

They all arrive at the asylum, where Rani and Clyde rescue Gita. Androvax then leaves and encounters Sarah Jane.

Sarah Jane refuses to help him because when the Veil are reawakened and leave Earth, the spaceships will cause Earth to explode, ending the human civilisation. Androvax then tricks Sarah Jane by faking his own death so she drops her guard, allowing him to take over her body.

Clyde jumps away from an incineration blast from two Men In Black, and the two men destroy each other. Rani explains to her mother about aliens, and how Sarah Jane, she and Clyde have encountered them. Mister Dread is placed into his capsule and made to sleep.

Androvax goes to the Vault, in Sarah Jane’s body, pretending to be her. He/she opens the Vault, revealing many spaceships, much to Gita’s surprise. Androvax then leaves Sarah’s body, and locks himself inside the Vault, which uses a Transmat to make it bigger on the inside. The team awaken Mister Dread, who gave up 450 years of his energy, to allow Androvax and his race to leave Earth without harming anybody by beaming them into space.

Mister Dread now lacks power, and declares his mission terminated. He erases the memory of Gita, who intends to tell the world about their experiences, and goes to sleep in his capsule.

The team return home, and Ocean and Minty arrive to ask about the Men In Black. Sarah Jane denies everything and Gita says she doesn’t believe in aliens. Minty and Ocean say that the aliens have won again and decide to leave. In outer space, Androvax flies away to find a new world, having saved his species.