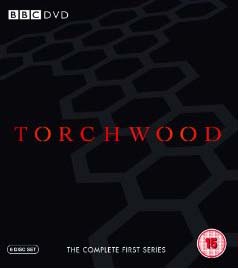 “They Keep Killing Suzie” is an episode in the British science fiction television series Torchwood. It is the eighth episode of the first series.

Torchwood is connected to a series of murders, with its name written on the walls of the latest victims, a suburban couple. Called to investigate by Detective Kathy Swanson, the Torchwood team discover traces of the murderer’s hair, its DNA showing signs of “Retcon”, the primary ingredient in their amnesia pills. Though initially reluctant, Jack allows Gwen to use Resurrection Gauntlet to temporarily bring back to life the latest victims, from which she discovers that their murderer was named Max, a fellow member of a group called “Pilgrim”, and that he knows of Torchwood’s former member, Suzie Costello, who had committed suicide some months back. Investigating Suzie’s possessions confirms her connection to the Pilgrim group.With no other leads to Max’ location, Jack allows them to use the Gauntlet on Suzie.

She is initially panicked on revival and Torchwood is unable to learn anything before she collapses, but to their surprise, she still seems to be alive. After she recovers, she identifies Max as one person she could confide in about her experience in Torchwood, but always used the amnesia pills to wipe his memory. Looking through the victims, she recognises them all as Pilgrim members, absent one girl. Torchwood arrives at the girl’s job and capture Max before he can kill her.

At the Hub, Max is found to be in a hypnotic-like state, only reacting violently for ten seconds on hearing the word”Torchwood”. Meanwhile, while the rest of the team ostracizes Suzie, Gwen gets to know her better. Suzie requests Gwen’s help in seeing her dying father in a distant hospital, and Gwen agrees, smuggling her out of Torchwood. Some time later, as they discover Suzie’s absence, the Hub is put into lockdown, triggered by Max’s repeated chanting of Emily Dickinson’s poem, “Because I could not stop for death”.

Tosh realises that Suzie, before her suicide, had programmed the Hub’s computer systems to react to Max, while Max was conditioned to carry out the murders and behave in this fashion if he did not receive the amnesia pill for three months, all part of a long game played by Suzie. They are forced to request for help from Detective Swanson, using other works by Dickinson in Suzie’s possessions to try to break the code. Tosh recognises that one of the books’ ISBN numbers could be the code, and successfully disables the lockdown. The team quickly race to follow Gwen and Suzie, aware that the Gauntlet is still siphoning energy between them, and could eventually kill Gwen.

Meanwhile, the two women arrive at the hospital, Gwen discovering she is becoming weak.

She is unable to stop Suzie from pulling her father’s life-support equipment, killing him, and soon Suzie, who had regained much of her strength, is forced to use a wheelchair to return Gwen to the car. Suzie is intercepted by Torchwood as she attempts to head for a ferry to one of the outer islands While carrying Gwen. Jack holds Suzie at gunpoint, but when she taunts him, he fires, discovering that the bullet wounds have no impact on her. Jack orders the team to destroy the Gauntlet, as soon as they do, Suzie collapses, dead, while Gwen begins to recover.

They return Suzie’s body to Torchwood, recognising that While they may have destroyed one Gauntlet, it may be possible there is a second one out there.