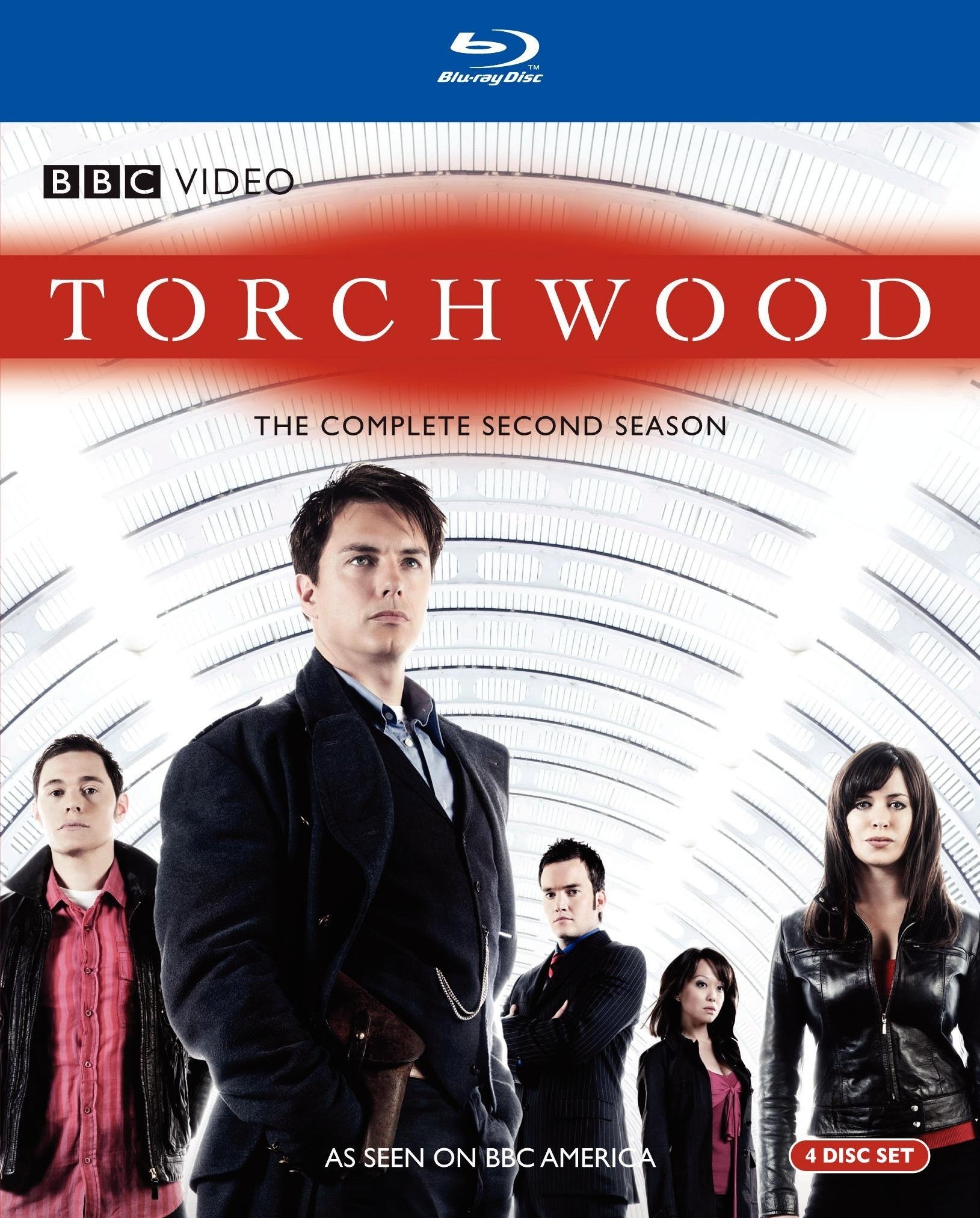 It is midnight on a lonely Cardiff street. As an old woman approaches a crossing with traffic lights, a red Chrysler Crossfire sports car races through Cardiff, driven by a Blowfish. The traffic lights go red. He stops and impatiently urges the old lady to cross the street. The Torchwood SUV stops, and asks the lady if she saw the Blowfish; she points them in the right direction. After they’ve gone, she mutters, “Bloody Torchwood!”

The team catch up with the Blowfish after a short chase. Owen shoots the tyres, forcing the Blowfish to leave the car. He flees into a house, where he shoots a resident and holds another hostage. The team hold him at gunpoint, and the Blowfish taunts them. He dares Ianto to shoot him, but Ianto hesitates. A shot is heard, killing the Blowfish. When Ianto turns around, he sees Jack, having just fired the shot. He greets the team with the words, “Hey kids, did ya miss me?”

At the Torchwood Hub, the team wants to know where Jack has been. He tells them he’s been with “my Doctor”. But he came back for Ianto and the rest. Tosh notices that there has been Rift activity.

Captain John Hart walks through the Rift at the top floor of a multi-storey car parking structure. He sees a man held at knife-point, and intervenes, grabbing the mugger’s neck, and dropping him over the edge to his death. He threatens the victim, saying he wasn’t there. The man agrees. John then goes to a nightclub called Bar Reunion, tells everyone whom he finds unattractive to leave, and pulls out two side-arms in front of the bouncers. Everyone panics and runs out.

Meanwhile, Torchwood Three inspects the body of the dead mugger on the street. Tosh notices traces of Rift energy on his neck. Jack then gets a message on his vortex manipulator; a hologram of John appears, telling him to come to the nightclub, alone. He does, but the others follow him in a taxi. When Jack arrives in the club, he and John approach each other and kiss, then fight. They break for a drink. John tells him that the Time Agency is gone, and that he has been to several rehabs for drink, drugs, sex and murder. John sees the others, and ridicules their team name — not Excalibur? Jack explains that John was his partner… in every sense of the word. John tells them that there are three deadly radiation cluster bombs scattered over Cardiff that could endanger everyone on Earth. They must be found and neutralised. With the help of Torchwood, it’s an easy job.

They enter the Hub and John is checked for weapons. He has many, including several concealed knives and pistols. Jack takes Gwen to the side to tell her that he has seen the end of the world. He shows signs of having fallen for Gwen, and jealousy when he realises Gwen is going to marry Rhys because “nobody else would have her”.

Tosh, meanwhile, finds the locations of the three bombs in the city. Gwen organises the team to go searching for the bombs in pairs: Jack and Ianto, Owen and Tosh, and Gwen and John. Jack has problems with this, and talks to Gwen alone. Gwen explains that she could get to know John better to gain his trust and learn what he is really up to. Jack relents, but gives Gwen three rules on how to handle John: keep him in front of her at all times, never trust him, and never let him kiss her.

The teams split up and Gwen and John are in the container docks. After some flirting, they find a cluster bomb in a container. Once Gwen has it, John kisses her, poisoning her with paralysing lip gloss. He throws away her mobile phone, and tells her that she has two hours before her major organs shut down and she dies. He shuts the doors to the container, trapping her inside, unmoving. Meanwhile, Owen and Tosh are in an abandoned building and find the bomb, but John arrives, knocks out Tosh, and shoots Owen in the hip.

Jack and Ianto are in an office building searching for the other bomb. Jack asks Ianto out on a date; Ianto accepts, but tries to change the topic. Jack explains that John Hart is a reminder of his past; “I want him gone.” He goes to the roof, while Ianto searches downstairs. Ianto hears a noise and realises it is John, holding him at gunpoint. John tells him Owen and Gwen are in trouble.

Jack finds the last cluster bomb, and is confronted by John. John wants the cluster bomb, but Jack refuses. He wants Jack to join him in travelling and conquering the stars. Jack isn’t tempted, and throws the bomb over the edge. “Oops!” John pushes Jack off the roof too. John retrieves the bomb and tells the dead Jack — splayed across the pavement — that murder rehab never worked. He returns to the Hub. Ianto goes to Owen, and helps Tosh dress his wound. They then go to the docks, and eventually find Gwen just in time to inject her with an anti-toxin.

At dawn, John goes to the corpse of the Blowfish, who worked for him, and takes out a small pyramid-shaped object from his pocket. He is then surprised to find the rest of the team holding him at gunpoint, and even more surprised to see Jack, who then explains that he is immortal. John then tells the truth: there are no cluster bombs. He was looking for an Arcadian diamond that belonged to a lover of his once; it was only a “dying woman’s wish” in that he killed her. The “bombs” actually comprise a device that would lead him to the location of the diamond. However, once John assembles the device, the woman’s hologram says that there is no diamond either.

A device shoots into John’s chest, and the hologram explains that the device is a bomb that locks into the DNA of whoever killed her; it cannot be removed without it prematurely exploding. There are ten minutes until the bomb goes off, but after the team refuse to help him, John punches Jack, grabs Gwen and takes her hostage by forcing her hand behind her head in surrender with her other arm behind her back and he then handcuffs himself to Gwen. She has a plan that would kill her and John, but would save the city. Tosh says that the Rift is still open from John’s arrival. Gwen takes John there, but Jack and Owen stay behind and quickly work on a solution.

They arrive at the car park, quickly followed by Jack and Owen, who inject John Hart with the DNA of all the Torchwood members, which temporarily confuses the bomb. The bomb releases itself, and they throw it through the Rift, with just one second to spare. Just as it explodes, they are shifted back in time to the moment John first arrived. John, impressed, lets Gwen go, and reluctantly agrees to go back home. Before he disappears, though, he has one last thing to tell his old friend: “By the way, I found Gray”. Jack, shocked, is asked who or what “Gray” is. He replies, “It’s nothing, let’s get back to work.”